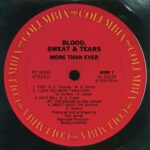 More Than Ever is the ninth album by the band Blood, Sweat & Tears, released in July 1976. This was the band’s ninth studio album and their last for Columbia Records. The album peaked at number 165 on the Billboard albums chart. It contained one charting single, “You’re the One” (US #106, AC #6).

The personnel changes in the band continued with Mike Stern replacing Georg Wadenius on electric guitar, Danny Trifan replacing Ron McClure on bass, and Forest Buchtell replacing Joe Giorgianni on trumpet. Percussionist Don Alias left the band, and Mike Corbett was added on background vocals. Famed bassist Jaco Pastorius, who had been discovered and signed to Epic Records by Bobby Colomby, was briefly in the band around this time but did not appear on the album.

More Than Ever was produced by Bob James who brought in such legendary session players as Steve Khan on guitar, Richard Tee on keyboards, Eric Gale on guitar, Hugh McCracken on guitar, and Eric Weissberg on banjo and dobro along with vocalist Patti Austin on background vocals to complement the regular BS&T lineup.

The album had an unusual cover design, simply presenting a photo of the vinyl record itself. The UK issue had a different sleeve: although the design was the same, the image differed as the centre label replicated the CBS Records one used in the UK which differed from the Colombia one used in the US.

More Than Ever was re-released on CD in 2003 on the Wounded Bird label along with Sony Music.

2 I Love You More Than Ever

8 Saved By The Grace Of Your Love