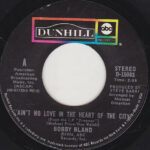 “Ain’t No Love In The Heart Of The City” is a 1974 R&B song written by Michael Price and Dan Walsh, and first recorded by Bobby “Blue” Bland for the ABC Dunhill album Dreamer.

While it is ostensibly a love song, some critics and fans have also heard it as a lament on urban poverty and hopelessness, as well as a lament upon the struggle to achieve one’s goals in life in the absence of external support. “Ain’t No Love In The Heart Of The City” remains a cult favorite, and is considered a classic.

Dreamer is the ninth solo studio album by American blues singer Bobby Bland. It was released in 1974 through ABC/Dunhill Records. Recording sessions took place at ABC Recording Studios in Los Angeles with songwriter and record producer Steve Barri. The album charted at number 172 on the Billboard 200 and at number 5 on the […]