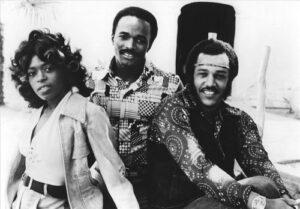 The Hues Corporation was an American pop and soul trio, formed in Santa Monica, California in 1969. They are best known for their 1974 single “Rock The Boat”, which sold over 2 million copies.

Before achieving mainstream success they were the opening act for a list of headliners that included Frank Sinatra, Milton Berle, Nancy Sinatra, and Glen Campbell. The original band had a lineup of three singers and three sidemen. The sidemen were Joey Rivera from the Checkmates; Monti Lawston; and Bob “Bullet” Bailey, formerly of the Leaves. Bailey, Rivera, and Lawston left the band to form Goodstuff.

The group’s name was a pun on the Howard Hughes Corporation, with the ‘hue’ (a synonym of ‘color’). The band’s members at the time of their first album were St. Clair Lee (born Bernard St. Clair Lee, April 24, 1944, San Francisco, California; died March 8, 2011), Fleming Williams (born December 26, 1943, Flint, Michigan; died February 15, 1998) and Hubert Ann Kelley (born April 24, 1947, Fairfield, Alabama). The original choice for the group’s name was The Children of Howard Hughes, which their record label turned down.

1973 The Hues Corporation – Freedom For The Stallion

1977 The Hues Corporation – I Caught Your Act

1978 The Hues Corporation – Your Place Or Mine