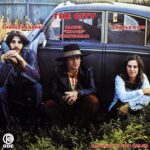 The City was a music trio consisting of Charles Larkey, her future husband, on bass, Danny Kortchmar on guitar/vocals and Carolie King on piano/vocals. The City produced one album, Now That Everything’s Been Said in 1968, but King’s reluctance to perform live meant sales were slow.A change of distributors meant that the album was quickly deleted; the group disbanded in 1969. The album was re-discovered by Classic Rock radio in the early 1980s and the cut “Snow Queen” received nominal airplay for a few years. Cleveland’s WMMS played it every few weeks from 1981 to 1985, and the long-out-of-print LP became sought after by fans of Carole King who like the edgy sound of the music.

1968 The City – Now That Everything’s Been Said