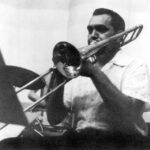 Enevoldsen recorded did sessions with Art Pepper and Shorty Rogers, and later extensively played with Shelly Manne. Enevoldsen did most of the arranging for Steve Allen’s Westinghouse show in the early-1960s. During the 1970s, he performed with Gerry Mulligan.