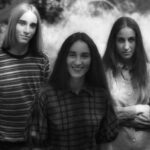 The 2nd Chapter Of Acts was a Jesus music and early contemporary Christian music group composed of sisters Annie Herring and Nelly Greisen and brother Matthew Ward. They began performing in 1972 and enjoyed their period of greatest success during the 1970s. The group disbanded in 1988.

Annie was the main songwriter of the group and the only one who played an instrument (piano). Her admittedly unschooled compositional style, with its frequent irregular rhythms, added somewhat progressive rock-like elements to what was otherwise a soft-rock sound. Matthew and Nelly initially made the occasional small contribution to the lyrics, and Matthew developed as a songwriter for the group as his solo career grew.

Annie and Matthew sang most of the solo parts. Nelly — whose voice could be hard to distinguish from Annie’s — usually sang lead only on songs where each member took a verse (“Which Way The Wind Blows”, “Something Tells Me”, “Takin’ The Easy Way”) or on solo pieces without the others singing backup (“I Don’t Wanna Go Home”, “Make My Life a Prayer to You” and “Mountain Tops”). Vocal leads such as in “My Jesus I Love Thee” and “Sing Over Me”, where she was backed by the others, were rare exceptions. Her voice was considered the “glue” to the 2nd Chapter of Acts sound, and her harmony parts were generally the most difficult to sing.