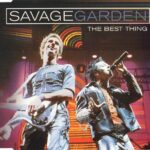 “The Best Thing” is a song by Australian pop group Savage Garden, released as the seventh and final single from their second studio album Affirmation on 19 March 2001. This was their final single released before their breakup later that year.

“The Best Thing” was released as a single on 19 March 2001, exclusively in the United Kingdom and Europe. It was the last single released by the group before their split in October 2001. The single’s cover art was also used for the album’s fifth Australian single, “Chained to You”. No official music video was made.

The song’s lyrics describe the contrasting feelings of being irresistibly attracted to a person while being too frightened to admit that attraction. The “best thing” represents the strongly positive perceptions a person may have of the one they feel attracted to.