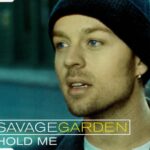 “Hold Me” is a song by Australian musical duo Savage Garden, released as the sixth overall single from their second studio album, Affirmation. Released in the United Kingdom in November 2000 and in Australia in January 2001, the single reached number 54 in Australia and became a top-20 hit in New Zealand and the United Kingdom. The music video features Darren walking around Borough Market, and streets in South London, whilst trucks drive in and out of them.