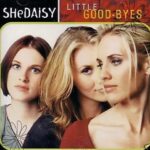 “Little Good-Byes” is a song written by Kristyn Osborn, Jason Deere and Kenny Greenberg, and recorded by American country music group SHeDAISY. It was released in February 1999 as the lead single from their debut album The Whole SHeBANG.

The song’s B-side, “Still Holding Out for You”, was the fifth and final single from the album.

The Whole SHeBANG is the debut studio album by the American country music group SHeDAISY (Kassidy Osborn, Kelsi Osborn and Kristyn Osborn). It was released on May 11, 1999 on Lyric Street Records, and has been certified platinum by the Recording Industry Association of America. Singles from this album were “Little Good-Byes,” “This Woman Needs,” […]