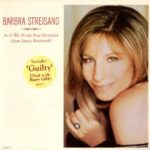 “As If We Never Said Goodbye” is a show tune from the musical Sunset Boulevard. It was written by Don Black, Christopher Hampton (with additional lyrics by Amy Powers), and Andrew Lloyd Webber. Ben Rimalower on Playbill calls it Andrew Lloyd Webber’s greatest song.

In 1994, American singer Barbra Streisand released her cover version of “As If We Never Said Goodbye”. It is taken from Streisands album Back to Broadway and peaked at number 20 on the UK Singles Chart.

Back to Broadway is the twenty-sixth studio album by Barbra Streisand, released in 1993. The album was Streisand’s second collection of songs from Broadway musicals, after 1985’s The Broadway Album. It debuted at number 1 on the Billboard 200 chart and gave her the title of “only female artist to have a number one album […]