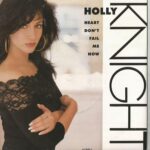 “Heart Don’t Fail Me Now” is a single by Holly Knight from her self titled album in 1988.

Holly Knight is an American songwriter, musician and singer. She released one solo album in 1988. She was a member of the 1980s pop rock groups Spider and Device, and wrote or co-wrote several hit singles for other artists, such as “Rag Doll”, “Obsession”, “Love Is a Battlefield”, “The Best”, “Invincible”, “Better Be Good To […]