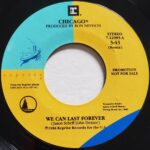 “We Can Last Forever” is a song that was released as a single from the album Chicago 19, released by the band Chicago in 1989.