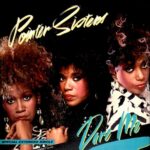 “Dare Me” is a 1985 song originally by American contemporary R&B group the Pointer Sisters, issued by RCA Records.

“Dare Me” was written by Nashville-based songwriters Sam Lorber and Dave Innis in 1984. Innis, who shortly afterwards became a founding member of Restless Heart, was then a staff writer for Warner Bros. music publishing division, and recalls that “Dare Me” was written with the Pointer Sisters in mind, adding: “typically  look at who’s recording now and what kind of material are they looking for, and we would tailor a song for a particular artist and pitch it”…”Sam Lorber and I…did try to put ourselves in the place of what a gal might be thinking…not specifically trying to be a Pointer Sister, but a song written from a female perspective, for sure. There are certain things that are more gender specific and gender appropriate…certain things that a woman can say that a guy’s not going to be able to get away with saying.”

Contact is the eleventh studio album by the American vocal group the Pointer Sisters, released in 1985 by RCA Records. Upon its release, Contact quickly became the Pointer Sisters’ second-most successful album to date; it was certified platinum, denoting U.S. sales of over one million, and helped the trio win an American Music Award for […]