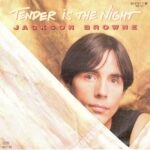 “Tender Is The Night” is a song by Jackson Browne released in 1983 as the second single from his album Lawyers in Love. The song peaked at number 25 on the Billboard Hot 100, spending 17 weeks on that chart after debuting at number 79, number 18 on the US Mainstream Rock Tracks chart, and number 24 on the US Adult Contemporary. It was also released as a single in Germany and the United Kingdom.