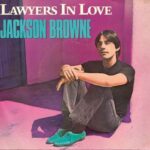 “Lawyers In Love” is the first single and title track of Jackson Browne‘s 1983 album of the same name, Lawyers in Love. Though not as successful as Browne’s previous single “Somebody’s Baby”, nonetheless at #13 it became Browne’s fourth-highest peaking hit on the Hot 100 as well as his final top 20 hit on the American pop charts, while in Canada peaking on RPM at #13. Browne wrote most of the songs on the album, including the title track.