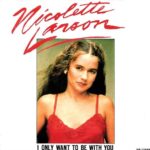 “I Only Want To Be with You” is a song written by Mike Hawker and Ivor Raymonde. The debut solo single released by British singer Dusty Springfield.

Nicolette Larson remade “I Only Want to Be with You” for her album All Dressed Up and No Place to Go produced by Andrew Gold and recorded October 1981 – January 1982 at Sunset Sound. Released as a single in July 1982 – parallel with the album’s release – Larson’s version featured as B-side “How Can We Go On”, a track from Larson’s 1981 album Radioland which had been an unsuccessful 1981 A-side release. Despite becoming Larson’s fourth single to rank on the Hot 100 chart in Billboard magazine – and her first Hot 100 entry since 1980 – “I Only Want to Be with You” would prove a Top 40 shortfall stalling at #53 in September 1983.