1981 Joe Walsh – There Goes The Neighborhood 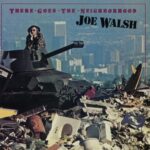 There Goes The Neighborhood is the fifth solo studio album by the American singer-songwriter and multi-instrumentalist Joe Walsh, sometime-guitarist for the Eagles. The album was released in May 1981, on Asylum Records, three years after Walsh’s album But Seriously, Folks…. A commercial and critical success, it is generally regarded as the culmination of the smoother, more adult-oriented sound of Walsh’s solo work.

The album peaked at number 20 on the Billboard 200. The album only spawned one single, “A Life of Illusion”, which would become one of Walsh’s most popular songs. The single also topped the Hot Mainstream Rock Tracks chart.

2 Made Your Mind Up

3 Down On The Farm

4 Rivers (Of The Hidden Funk)

5 A Life Of Illusion