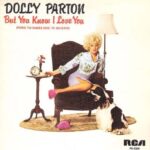 “But You Know I Love You” is a song written by Mike Settle, which was a 1969 pop hit for Kenny Rogers and The First Edition, a group that included Settle and Kenny Rogers. The song also became a major country hit by Bill Anderson in 1969. In 1981, a cover version of “But You Know I Love You” by singer Dolly Parton topped the country singles charts and peaking at number 41 on 16 May 1981 on the Hot 100.