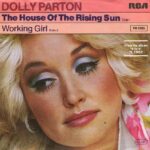 “The House Of The Rising Sun” is a traditional folk song, sometimes called “Rising Sun Blues”. It tells of a person’s life gone wrong in the city of New Orleans. Many versions also urge a sibling or parents and children to avoid the same fate.

In August 1980, Dolly Parton released a cover of the song as the third single from her album 9 to 5 and Odd Jobs. Like Miller’s earlier country hit, Parton’s remake returns the song to its original lyric of being about a fallen woman. The Parton version makes it quite blunt, with a few new lyric lines that were written by Parton. Parton’s remake reached number 14 on the US country singles chart and crossed over to the pop charts, where it reached number 77 on the Billboard Hot 100; it also reached number 30 on the US Adult Contemporary chart. Parton has occasionally performed the song live, including on her 1987–88 television show, in an episode taped in New Orleans.