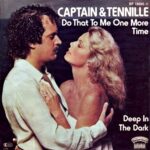 “Do That To Me One More Time” is a song performed by the American pop duo Captain & Tennille. It was their 13th charting hit in the United States, and their second number 1 hit on the Billboard Hot 100 chart. The song was included on the duo’s 1979 studio album, Make Your Move, and was written by Toni Tennille. It features a Lyricon solo by saxophonist Tom Scott, though Captain mimed to this part on a descant recorder in the promotional video. Even though an edited version was released as a single, yet another version was created for their many TV performances promoting the song. This version contained a “natural” ending, opposed to the fade-out ending that was featured on the single and album versions.

Make Your Move is the fifth album by the American duo Captain & Tennille. Released in 1979, the album includes the #1 hit single “Do That to Me One More Time”. The album was certified Gold by the RIAA. It is their first album on Casablanca Records. The cover features the only Captain & Tennille […]