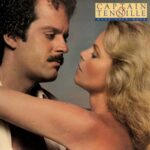 Make Your Move is the fifth album by the American duo Captain & Tennille. Released in 1979, the album includes the #1 hit single “Do That to Me One More Time”. The album was certified Gold by the RIAA. It is their first album on Casablanca Records.

The cover features the only Captain & Tennille (major release) album cover to have Daryl Dragon without his nautical hat. The subsequent covers of three singles released from the album were also from the same photoshoot as the LP: “Do That to Me One More Time” is similar to the LP cover, yet the photo is a medium shot, rather than close-up; “Happy Together (A Fantasy)” features The Captain & Tennille facing the camera (rather than each other) and; “Love on a Shoestring” has Daryl resting his forehead on Toni’s forehead.

1 Love On A Shoestring

2 No Love In The Morning

3 Deep In The Dark

4 How Can You Be So Cold

5 Do That To Me One More Time

6 Happy Together (A Fantasy)

7 Baby You Still Got It

8 Never Make A Move Too Soon