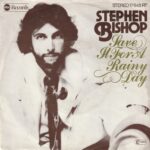 “Save It For A Rainy Day” is a song by American singer/songwriter Stephen Bishop. The song was the first of two hit singles from his debut album, Careless. It features a guitar solo by Eric Clapton and Chaka Khan on backing vocals toward the close of the song.

The song speaks of abbreviated relationships and broken hearts. The opening verse is set in Jamaica, speaking of beautiful but opportunistic women attempting to take advantage of lonely tourists.

The song was a bigger Adult Contemporary hit, peaking at number six in the U.S. and number eight in Canada

Careless is the debut album by singer/songwriter Stephen Bishop. It includes two hit singles: “On and On”, which peaked at No. 11 on the Billboard singles chart, and “Save It for a Rainy Day” which made No. 22. The album itself rose to No. 34 on the Billboard albums chart. Notable contributors to the album […]