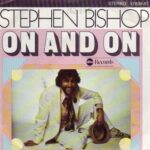 “On And On” is a song by American singer-songwriter Stephen Bishop. The song, from his debut album Careless, became a major hit, peaking at number 11 on the U.S. Billboard Hot 100 and spending 28 weeks on the chart. In Canada, the song peaked at number 6.

On the U.S. Easy Listening chart, “On and On” peaked at number two. It reached number three on the corresponding Canadian chart.

Despite failing to crack the top ten, it was the 30th ranked single on the Billboard magazine year-end chart for 1977 as a result of its almost seven-month chart run.

Careless is the debut album by singer/songwriter Stephen Bishop. It includes two hit singles: “On and On”, which peaked at No. 11 on the Billboard singles chart, and “Save It for a Rainy Day” which made No. 22. The album itself rose to No. 34 on the Billboard albums chart. Notable contributors to the album […]