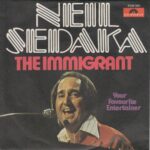 “The Immigrant” is a 1975 single written by Neil Sedaka and Phil Cody and performed by Sedaka. The single was the second release from his album, Sedaka’s Back. “The Immigrant” was dedicated to John Lennon and the immigration problems that he faced. The single peaked at number 22 on the Billboard Hot 100 and spent one week at number one on the Easy Listening chart in May 1975.

Sedaka has referred to “The Immigrant” as his most controversial song and the only time he ever publicly waded into politics as a performer. According to Philip Cody, the song’s lyric writer, it was originally written as a tribute to his father, Anthony Feliciotto, who came to America from Sicily in 1930. Sedaka’s parents had also emigrated, from Russia/Poland.

Sedaka’s Back is a compilation album by American singer-songwriter Neil Sedaka. The record, composed of selections from his previous three albums, which had been released only in the UK, was released on Elton John’s label, The Rocket Record Company, in 1974. Three singles were released from this album: “Laughter in the Rain” (a #1 hit), […]