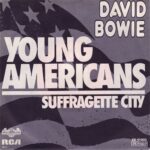 “Young Americans” is a song by English singer-songwriter David Bowie, released in 1975. It is included on the album of the same name. The song was a breakthrough in the United States, where the glam rock of Bowie’s earlier career had limited popularity outside the major cities. The song reached No. 28 on the Billboard Hot 100, making it his second biggest success on that chart until that point, meanwhile it would go on to reach number 18 in the UK Singles Chart.

Bowie retired performing the song following his Sound+Vision Tour in 1990. “Young Americans” has since appeared on many compilation albums, and was remastered in 2016 as part of the Who Can I Be Now? (1974–1976) box set.

Young Americans is the ninth studio album by English musician David Bowie, released on 7 March 1975 through RCA Records. The album marked a departure from the glam rock style of Bowie’s previous albums, showcasing his interest in soul and R&B. Commentators have described the record as blue-eyed soul, although Bowie himself labelled the album’s […]