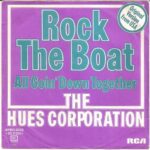 “Rock The Boat” is a song by American trio The Hues Corporation, written by Wally Holmes. “Rock The Boat” was first featured on their 1973 debut studio album Freedom for the Stallion (the single edit later appeared on certain editions of the band’s 1974 second album Rockin’ Soul). It was released as the third single from the album in early 1974, to follow up Stallion’s title song, which had peaked at number sixty-three on the Hot 100, and “Miracle Maker (Sweet Soul Shaker)” which did not chart.

Initially, “Rock the Boat” appeared as though it would also flop, as months went by without any radio airplay or sales activity. Not until the song became a disco favorite in New York did Top 40 radio finally pick up on the song, leading the record to finally enter the Hot 100 and zip up the chart to number one the week of July 6, 1974, in only its seventh week on the chart (and fourth week in the Top 40). The record also reached the top ten in the United Kingdom. “Rock the Boat” is considered one of the earliest disco songs. Some authorities proclaim it to be the first disco song to hit number one on the Billboard Hot 100 chart, while others give that distinction to “Love’s Theme” by Love Unlimited Orchestra, a chart-topper from earlier in 1974. The song became a gold record. It is a heavy airplay favorite on oldie and adult contemporary stations today.

Holmes wrote the song for the band’s first album, and started the song with the line “Ever since our voyage of love began..”. In an attempt to make it more punchy, producer John Florez suggested starting with the line “So I’d like to know where you got the notion.”

The song features a lead vocal by Fleming Williams, who left The Hues Corporation shortly after the song was recorded. According to The Billboard Book of Number One Hits by Fred Bronson, the lone female member of the group, H. Ann Kelley, had originally been pegged to sing lead, but this idea was discarded out of fear that groups with female lead singers were less commercially viable. The bass player on the session was Wilton Felder, not James Jamerson as sometimes reported. Florez also brought in two other members of the Jazz Crusaders, Joe Sample on piano and Larry Carlton on guitar, as well as Jim Gordon on drums. Wally Holmes wrote and played the trumpet line.

Producer John Florez did not like the lyrics for “Rock The Boat”, calling them “trite”, and it was originally made a B-side. After a riveting response from New York City’s dance clubs, Florez remixed the song to boost the bass and rhythm instruments, and it was quickly re-released, becoming a smash.

The Hues Corporation member St. Clair Lee claims “It was a song that you could do anything on. You could cuddle or you could get crazy if you wanted to. It was a love song without being a love song. But, it was a Disco hit and it happened because of the discos.”

The song features a change in meter during the pre-chorus “We’ve been sailing with a cargo full of love and devotion” where it is for one measure while the rest of the song is in common time.

Freedom For The Stallion is the debut album by The Hues Corporation. Released in 1973, it includes the #1 Billboard Hot 100 hit “Rock The Boat.” The title track, “Freedom for the Stallion” was also a minor hit on the Billboard charts. This Allen Toussaint song had been recorded earlier by Lee Dorsey in 1971. […]