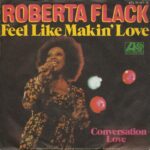 Released nine months before the album of the same title, the song became one of the greatest musical successes of 1974, as well as of Roberta Flack’s recording career. It scored a week at number 1 on the Billboard Hot 100 singles chart, making it Flack’s third #1 single, making her the first female vocalist since 1940 to top the chart in three consecutive years. “Feel Like Makin’ Love” also had five weeks at #1 on the Hot Soul Singles chart. and two weeks at #1 on the Adult Contemporary charts of both Canada and the U.S. Flack produced the record under the pseudonym Rubina Flake. It went on to receive three Grammy nominations for Flack: Record of the Year, Song of the Year, and Best Female Pop Vocal Performance.

Released in 1975, Feel Like Makin’ Love is Roberta Flack‘s fifth solo album and sixth overall, when counting her duet album with Donny Hathaway, Roberta Flack & Donny Hathaway from 1972. It was the first album produced by Flack herself, under the pseudonym Rubina Flake. The album’s title cut had been issued as a single […]