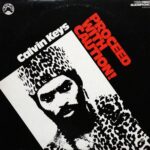 Proceed with Caution! is the second solo album by Calvin Keys, releases in 1974 on Black Jazz.