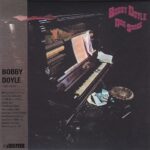 Nine Songs is an album by Bobby Doyle, released in 1973 on Bell Records and was re-released in 2014.

2 How Can A Poor Man Stand Such Times And Live?

4 One More River To Cross