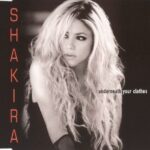 “Underneath Your Clothes” is a song by Colombian singer-songwriter Shakira for her third studio album and English-language debut, Laundry Service (2001). The power ballad was the second English language single released from the album; being released on 11 February 2002. It features lyrics by Shakira with music and production from Shakira and Lester Mendez. Lyrically, the song tells the story of the unconditional love that a woman has for her boyfriend, with lyrics about being worthy of somebody’s love for being a good person and having maternal instincts.