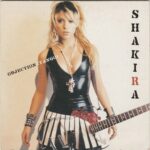 “Objection (Tango)” is a song by Colombian singer-songwriter Shakira for her fifth studio album and first English-language album Laundry Service (2001). It was the first song Shakira wrote in English after being encouraged by American singer Gloria Estefan to record material in the language. She also produced the track along with Lester Mendez. “Objection (Tango)” musically combines elements of pop rock and tango, and contains instrumentation from the bandoneón and guitar. Through the lyrics of the song, Shakira aims to end a love triangle she is a part of. The song was released as the fourth single from the album on 24 May 2002. A Spanish version of the song, entitled “Te Aviso, Te Anuncio (Tango)” (“I’m Warning You, I’m Telling You”), was also recorded.