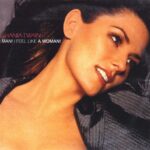 “Man! I Feel Like A Woman!” is a song by Canadian singer-songwriter Shania Twain from her third studio album, Come On Over (1997). Written by Twain and her longtime collaborator and then-husband Robert John “Mutt” Lange, who also produced the track, the song was released first to North American country radio stations in March 1999 as the eighth single from the album, and it was released worldwide later the same year. “Man! I Feel Like A Woman!” is a country pop song with lyrics about female empowerment.

The song received generally favorable reviews from music critics, who praised the song’s attitude and hook as well as Twain’s vocals. Commercially, the song was also successful, reaching the top-ten in six countries, while reaching the top-twenty in Canada and number 23 on the US Billboard Hot 100 chart. It was even more successful on the Hot Country Songs chart, reaching the top-five and was certified Platinum by the Recording Industry Association of America (RIAA) for 1,000,000 digital downloads. The song also won a Grammy for Best Female Country Vocal Performance in 2000.

Come On Over is the third studio album recorded by Canadian country music singer Shania Twain. It was released on November 4, 1997, and became the best-selling country album, the best selling album by a Canadian and is recognized by Guinness World Records as the biggest-selling studio album by a solo female artist, and the […]