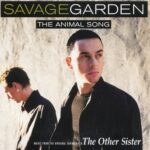 “The Animal Song” is a song by Australian pop music duo Savage Garden, released a single on 23 February 1999. The song was written for the soundtrack of the film The Other Sister and also appeared on their second studio album.

The video for the song was directed by Jim Gable. It features Hayes walking through a parade, with intercut scenes from The Other Sister with Juliette Lewis. The song is also used in the “Shamu Rocks” seasonal nighttime show at SeaWorld, America. “The Animal Song” became the group’s third Canadian number one single, topping the singles chart for three weeks, from 27 March 1999. It also peaked at number three in Australia and New Zealand, number 19 in the United States, and—in the summer of 1999—number 16 on the UK Singles Chart.