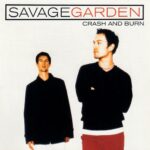 “Crash And Burn” is a song by Australian pop group Savage Garden from their second album, Affirmation, released as the album’s fourth single (third in the UK) on 20 March 2000. It reached the top 20 in Australia, Canada, New Zealand, and the United Kingdom, as well as number 24 on the US Billboard Hot 100, making it their last US hit to date.

The song’s lyrics describe the difficult search for solace and meaningful relationships in a cold world, peaking in a chorus that argues it is fine to “crash and burn” during tough times in order to get over heartache and pain. In a June 2017 interview, singer Darren Hayes described it as one of his favourite Savage Garden songs: “Musically it’s a dear song to me, because it’s all the words I wished someone would have said to me during the period after the first Savage Garden album.”