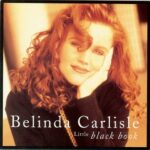 “Little Black Book” is the fourth and final single from Belinda Carlisle‘s Live Your Life Be Free album, released in 1992. It was the first ever released single co-written by Carlisle. Future Grammy-winner Sheryl Crow sang background vocals under the name “Cherryl Crowe”.

The B-side “The Air You Breathe” was originally performed by Stéphanie in 1991, under the title “You Don’t Die From Love”.