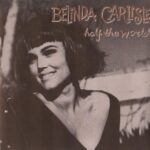 “Half The World” is a song by Belinda Carlisle, released in 1992 as the third single from her fourth studio album Live Your Life Be Free. The song was written by Richard Feldman, Eric Pressly and Ellen Shipley, and produced by Feldman. It features backing vocals by Sheryl Crow.