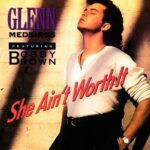 “She Ain’t Worth It” is a song by recording artist Glenn Medeiros. It features a rap from R&B artist Bobby Brown. The song reached No. 1 for two weeks on the US Billboard Hot 100, becoming Medeiros’ only No. 1 hit in the United States, and the second and last No. 1 hit where Brown has received credit as an artist, after “My Prerogative”. The single also reached the top 20 on the UK Singles Chart, where Medeiros had previously reached number one with “Nothing’s Gonna Change My Love for You”, and peaked within the top 10 in Australia, Canada, Finland, and Ireland.