1989 Starship – Love Among The Cannibals 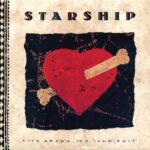 Love Among The Cannibals is the third album released in 1989 by rock band Starship. It was the first album after Grace Slick’s departure from the band, and their last full-length studio release until Loveless Fascination in 2013. The album marks a shift in the band’s musical direction, featuring a harder edged, AOR style as opposed to the synth pop of their first two albums. Another departure from the preceding albums is the decrease in outside writers, as this album features four songs written by Thomas, Morgan, or Chaquico. The song “Wild Again” had previously been produced for the soundtrack to Cocktail (1988), and was included as a bonus track for the album’s CD release. The album had one top 20 single on the Billboard charts, “It’s Not Enough”, which peaked at No. 12 in October 1989 and was their final Top-40 hit, but the album itself only climbed to No. 64. The track “I’ll Be There” went on to being featured in the end credits of Gross Anatomy (1989).

4 I Didn’t Mean To Stay All Night

6 Love Among The Cannibals

7 We Dream In Color