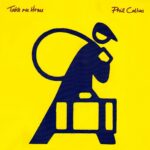 “Take Me Home” is a song written and performed by British drummer and singer-songwriter Phil Collins. It is the tenth and final track on Collins’ third solo album, No Jacket Required. Collins co-produced the song with Hugh Padgham and released it as a single in the UK in July 1985 and the U.S. in March 1986. It did moderately well in the UK, peaking at No. 19. While it was not as successful as other singles from the album, such as “Sussudio” or “One More Night” in the US, it still reached the top 10, peaking at No. 7.