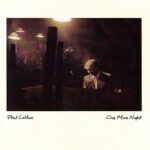 “One More Night” is the first single in the United States and second in the United Kingdom from Phil Collins‘ third album, the Diamond-certified No Jacket Required. “One More Night” was Phil Collins’ second U.S. No. 1 single, following “Against All Odds”, and was his fourth single to reach the top ten in the UK, peaking at No. 4 on the singles chart. In the U.S., the single entered the Billboard Hot 100 at number 50 on the chart dated February 9, 1985. It hit number one seven weeks later and remained on top for two weeks. In the UK, the single was certified silver by the British Phonographic Industry. It was also his first No. 1 on the U.S. Adult contemporary chart.