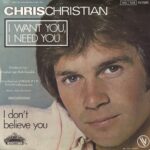 “I Want You, I Need You” is a single by Chris Christian from his selftitled album (1981). It reached #37 in the US Billboard Charts