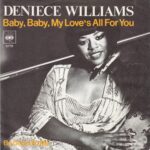 “Baby, Baby My Love’s All for You” is a song by Deniece Williams, released as a single in October 1977 by Columbia Records. The song reached No. 13 on the US Billboard Hot Soul Songs chart, No. 5 on the UK Blues & Soul Top British Soul Singles chart and No. 32 on the UK Pop Singles chart