1977 Air Supply – Love And Other Bruises 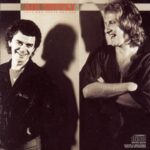 Love & Other Bruises is the third studio album by Australian soft rock band Air Supply. It was the group’s debut album in America and only released internationally. The album compiled re-recorded versions of some of their past singles, such as “What a Life”, “Feel the Breeze” and “Empty Pages”, from their self-titled debut album, and “Do It Again”, “End of the Line” and “That’s How the Whole Thing Started” from the album The Whole Thing’s Started. “Who Will Love Me Now” and Does It Matter” were new songs written for this specific album.

The album was recorded in America while the band were touring in support of Rod Stewart and designed specifically for the American market. Air Supply’s touring band was not utilized on the record. Lead vocalists Graham Russell and Russell Hitchcock sang their parts to tracks laid down by American studio musicians. Jeremy Paul, Air Supply’s bass player and third lead vocalist was relegated to backing vocal duties for the recording sessions. This led to his leaving the band after the album’s release.

10 Thats How The Whole Thing Started