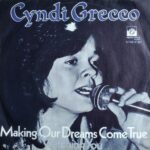 “Making Our Dreams Come True” is a 1976 hit single written by Charles Fox and Norman Gimbel. It was recorded by Cyndi Grecco, then an unknown musician. The title track of her debut album, it was also used as the theme song to the 1976–83 television sitcom Laverne & Shirley (where it was titled “We’re Gonna Make It” in the first-season end credits).

“Making Our Dreams Come True” reached number 25 on the U.S. Billboard Hot 100 and number 21 on the Cash Box Top 100. The song was a somewhat bigger hit in Canada, where it reached number 16. It spent 16 weeks on the U.S. charts, peaking in early July, and also reached number 13 on the Adult Contemporary chart. To date, it is Grecco’s lone record to reach any chart.

Making Our Dreams Come True is the debut album by pop singer Cyndi Grecco, recorded and released in 1976 on Private Stock Records. This album was produced by Charles Fox and Janna Merlyn Feliciano (then-wife of José Feliciano). It includes the title cut, which was the theme song of the Laverne & Shirley television sitcom, […]