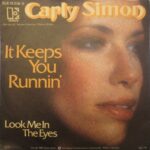 “It Keeps You Runnin'” is a song by the American rock band The Doobie Brothers. The song was written by band member Michael McDonald, and served as the third single from their sixth studio album Takin’ It to the Streets. It was also covered and released as a single by Carly Simon.
American singer-songwriter and musician Carly Simon covered “It Keeps You Runnin'” for her sixth studio album Another Passenger, and the song served as the lead single. Simon’s version charted on both the Billboard Pop singles chart and the Billboard Adult Contemporary chart.

Another Passenger is singer-songwriter Carly Simon‘s seventh album, and sixth studio album, released in 1976. For this album, Carly Simon enlisted a new producer, Ted Templeman, as well as his clients, The Doobie Brothers and Little Feat, to provide musical and vocal backing. Another Passenger peaked at No. 29 on the Billboard Pop albums chart. […]