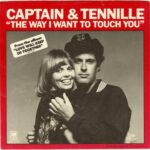 “The Way I Want To Touch You” is a song written by Toni Tennille, which started the professional recording careers for Captain & Tennille. It was certified gold by the Recording Industry Association of America (R.I.A.A) for sales of one million units. Captain & Tennille recorded a Spanish version, entitled “Como Yo Quiero Sentirte” which was released as a single in 1975. It was taken from the Spanish version of their debut album Por Amor Viviremos. The duo also re-recorded “The Way I Want To Touch You” in 1995 for their album, 20 Years of Romance.