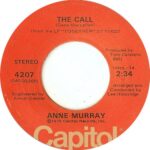 “The Call” is a song written by Gene MacLellan. MacLellan originally released a version the song in 1970.

Anne Murray recorded her first version on her 1970 album, Honey, Wheat and Laughter. In 1975, she recorded a different version of the song, produced by Tom Catalano. The song reached #5 on the Canadian country chart, #6 on the U.S. Adult Contemporary chart, and #13 on the Canadian Adult Contemporary chart in 1976. The song appeared on her 1975 album, Together

Together is the tenth studio album by Anne Murray, released in November 1975. The album reached number 15 on the U.S. country album charts and #142 on the pop albums charts. It was one of Murray’s few albums during this time period that did not chart in Canada. Two singles were released from the album: […]