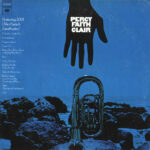 Clair is an album by Percy Faith, released in 1973 on Columbia.

Percy Faith (April 7, 1908 – February 9, 1976) was a Canadian bandleader, orchestrator, composer and conductor, known for his lush arrangements of pop and Christmas standards. He is often credited with popularizing the “easy listening” or “mood music” format. He became a staple of American popular music in the 1950s and continued well into the 1960s. Though his professional orchestra-leading career began at the height of the Swing Era, he refined and rethought orchestration techniques, including use of large string sections, to soften and fill out the brass-dominated popular music of the 1940s.