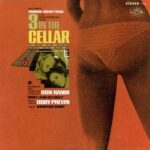 3 In The Cellar (also known as Up in the Cellar) is a 1970 American comedy film directed by Theodore J. Flicker and starring Wes Stern, Larry Hagman, Joan Collins, Judy Pace, David Cargo, and Joan Darling. The plot concerns a man who decides to bed three women.

It was described by AIP as “as near a sequel to Three in the Attic as possible” and was originally known as The Late Boy Wonder. The music was composed by Don Randi.