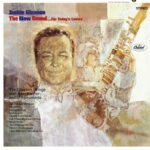 The Now Sound… For Today’s Lovers is an album by Jackie Gleason, released in 1969.

John Herbert Gleason (February 26, 1916 – June 24, 1987) was an American actor, comedian, writer, composer, and conductor known affectionately as “The Great One.” Developing a style and characters from growing up in Brooklyn, New York, he was known for his brash visual and verbal comedy, exemplified by his city-bus-driver Ralph Kramden character in the television series The Honeymooners. He also developed The Jackie Gleason Show, which maintained high ratings from the mid-1950s through 1970. After originating in New York City, filming moved to Miami Beach, Florida, in 1964 after Gleason took up permanent residence there.